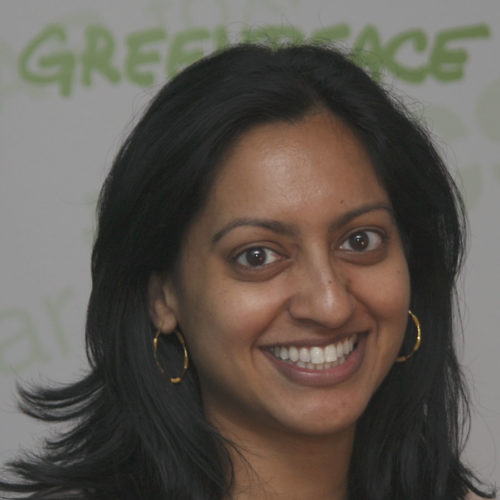 Deepa Isac has been a legal advocate for activists for over a decade. Ms. Isac currently serves as General Counsel at Indivisible, a non-profit organization dedicated to cultivating and lifting up a grassroots movement of local groups to realize bold progressive policies and elect progressive leaders. Prior to this position, she served as Chief of Staff of Greenpeace USA. Before her tenure as Chief of Staff of Greenpeace USA, she served as the organization’s Deputy General Counsel. As an attorney at Greenpeace USA since 2004, Ms. Isac managed criminal law cases on behalf of environmental activists who engaged in peaceful civil disobedience to promote policy change; served as the legal liaison on numerous environmental lawsuits involving the Endangered Species Act and the National Environmental Policy Act; and managed administrative law and intellectual property cases.

Prior to her work with Greenpeace, Ms. Isac served as an Assistant Public Defender in Rochester, New York, where she defended the interests of the indigent. Before joining the public defender’s office, Ms. Isac was an Assistant Attorney General for the Commonwealth of Massachusetts, where she prosecuted civil violations of consumer protection and antitrust laws against members of the telecommunication and insurance industries.

Ms. Isac currently also serves on the Board of Directors of the Rainforest Action Network, whose mission is to preserve forests, protect the climate and uphold human rights. She is Of Counsel at the public interest law firm of Handley Farah & Anderson, which fights corporate abuse and discrimination though civil & human rights, consumer protection and antitrust litigation.